The grueling ten-month journey into Ontario’s healthcare bureaucracy to get a melanoma removed from a woman’s neck.

We have spent quite a bit of time describing the journey of Maria, a 40ish-year-old mother of four, experience first-hand the inner workings of the Ontario healthcare system.

She had a bump on her neck, but due to a series of complexities, the prevailing lockdowns, and incomprehensible bureaucratic red tape, she had to wait 8-9 months before she was able to get an official diagnosis of Stage 3 melanoma.

In Part 1 we talked about a very important lymphoscintigraphy that Maria would need to have done eventually. However, we do not believe we gave that moment justice and glanced over many of the details. This is where we remedy that oversight and explain, in more details, some of the medicine and the very difficult decision Maria had to make.

Where we left off…
After waiting month after month for the healthcare bureaucracy to do something about her melanoma, Maria decided to take matters into her own hands and used her network to find a doctor who would see her right away.

Around mid-December 2020, she found Dr. Colin Hong, a Toronto-based reconstructive plastic surgeon, who was ready to help. She travelled several hours to his clinic and in a few short days he ran blood tests, took x-rays, and performed a CT scan.

With all signs pointing to her melanoma not having spread, he was able to schedule an excision and remove this ticking time bomb on her neck. 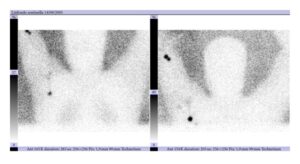 Lymphoscintigram of a patient with a primary melanoma of the forearm, with intense uptake of radioactive colloid in an epitrochlear node and uptake of the tracer in axillary region.

However, there was one thing he was not able to arrange: A lymphoscintigraphy – a procedure where radioactive dye is used to map the lymphatic system, trace where cancers can spread to, and identify lymph nodes that need to be biopsied. Since Dr. Hong was not able to arrange the lymphoscintigraphy, it meant it would have to be scheduled after the excision. The typical process is as follows:

Excisions can, on occasion, create new lymph node drainage pathways and generate misleading results. In other words, if Maria’s melanoma had metastasized and spread to a nearby lymph node, there was a possibility that performing a lymphoscintigraphy AFTER the excision would lead the radioactive dye to the wrong lymph nodes.

NOTE: Here is a brief video from the American Cancer Society that explains the process.

Considering the promising blood work, x-rays, and CT scans, the looming Holiday Season lockdown on the horizon, and her growing disillusionment with the healthcare system, Maria chose – with guidance from Dr. Hong and support from her family – to do the melanoma excision in Toronto and perform the lymphoscintigraphy at her local hospital sometime in the future.

Dr. Hong performed the excision in his Toronto clinic on December 22, 2020, and Maria returned home to wait patiently until she heard back from her local hospital.

Shortly after Dr. Hong’s excision, Maria was admitted as a patient at her local hospital and soon met with her new surgeon to prepare for the lymphoscintigraphy.

That consultation took place on January 2021 and Maria quickly came to the realization that she was going into uncharted territory. While she knew the lymphoscintigraphy and lymph node biopsies would be invasive and most likely painful, she had not ever considered that chemotherapy could be in her future.

And that is exactly what her surgeon told her. That there is a likelihood that chemo will be needed.

That hit her like a tonne of bricks. Her neck was already significantly scarred due to the excision, and now she faced the possibility of being injected with poison to kill any remnants of potentially cancerous cells. She was not out of the woods yet and faced a long recovery replete with dangerous procedures and tough decisions.

She reminded herself that you should not worry about things you cannot control. After all, thinking about the worst-case scenario is never productive and who knew, maybe the results of the lymphoscintigraphy and lymph node biopsies would be favourable. But, even with a supportive husband who kept reminding her of that possibility, the word “chemo” has the uncanny ability to burrow deep down in the corner of a person’s psyche, no matter your optimism or confidence.

NOTE: Any healthcare practitioner will tell you general anesthetics is only done if absolutely necessary due to its added risks.

Second, they were not only doing a biopsy for one lymph node, but two.

Third, the surgery saw a large loss of blood and her blood pressure dropped dramatically. What would normally have been a 30min post-op recovery extended to approximately two hours.

To add figurative salt in the wound, accessing the lymph nodes required invasive surgical attention and the surgeon had to gnaw through muscle tissue and nerve bundles before they could get to the lymph nodes. As you can imagine, it took Maria several weeks before the pain in her neck and shoulders went away.

“I could barely lift my five-year-old,” says Maria. “It took weeks before I could move my shoulder without a sharp ‘twang’ rippling through my body.”

And now, much like the theme of her journey, she had to wait for the results.

Bad Genes
During that time, she reflected and learned more about her family medical history.

It is important to remember that skin cancer, like many other cancers, is not only linked to behavioural and/or environmental factors, but also hereditary ones. And since skin cancer does not benefit from the caché possessed by other cancers (breast and colon cancers come to mind) and does not typically require extended visits to the hospital, it is quite possible that someone in your family has had skin cancer, but never felt the need to discuss the issue.

And, as it turns out, Maria’s father had been diagnosed with several instances of skin cancer. As did her aunt, grandfather, and two cousins. In fact, one cousin is so concerned about getting skin cancer that they regularly pay for full body scans as a screening measure and even wears a wetsuit when they go in a pool.

So, do yourself a favour and ask family members if they have ever had skin cancer. You might be shocked by the answer.

Late February 2021, Maria got the results of her biopsies. Via email.

It was not a notice that said her results were ready and to call the doctor or to schedule an appointment. It was literally just an email that said, “click on this link to see the results of your biopsies” (or something along those lines). It seemed particularly impersonal considering this was a potentially life-or-death message.

Maria clicked on the link and was overwhelmed. She had never read a medical biopsy report and her eyes were a jumble as she scanned left-and-right, up-and-down – not reading a single sentence – in what was bureaucratic window dressing that slowed her search for medical emancipation.

And then, she finally found it. The one word that would predicate the rest of her life… “Negative.”

Needless to say, Maria was ecstatic. After close to a year’s worth of stress, panic, and uncertainty, she was finally able to take a deep breath and cry a little with her family. The kind of cry that wipes away countless awful thoughts and way too many taxing conversations. Some of you might know how Maria felt, and if you have not, hope you never do.

Not done yet
Maria now had the results of her biopsy and was scheduled for a follow-up appointment with her surgeon.

Remarkably, aside from the surgeon being surprised that the results came back negative (which is not exactly a vote of confidence), all that took place was a brief conversation about the tests before the surgeon referred her to an oncologist (a doctor whose specialty is cancer).

When she finally met with the oncologists, the doctor shared with her that they had reclassified Maria’s condition as a Stage 2B melanoma, which was a big step down from Stage 3, but not enough to warrant a discharge. Remember, while tests showed the melanoma had not spread to the lymph nodes, there was no way to determine with 100% certainty that the excision had removed all the cancerous tissue from her neck. And since the melanoma had burrowed its way deep into the skin, there was still a lot of work to be done.

The oncologist did not think that chemotherapy, or immunotherapy – a cutting edge treatment for cancers that can lead to many substantial side effects, like diabetes – was right for her at this time. Should the melanoma be eventually reclassified as a Stage 3, then maybe more drastic measures would be needed.

He also offered Maria the option to take part in a Toronto-based study for a new melanoma treatment. Since half the participants would get a placebo, and since Toronto was several hours away, she opted to pass.

Cancer does not care about your plans

Maria has come to accept that melanoma will be part of her life forever.

Second, should Maria ever face other illnesses in her future, like strep throat or hypertension, there would need to be someone to act as a kind of medical clearinghouse to direct traffic and keep an eye on any potential contraindications. And that was her family doctor. Problem is, her GP had generally been kept out of the loop since Maria had to take matters into her own hands and go outside the traditional healthcare bureaucracy.

Lastly, and anyone with a cancer diagnosis will agree, it is not only her health that changed, but also her activities of daily living, like her morning routine. For example, while the sun is not Maria’s enemy, it is not her friend either. Maria is now forced to organize her life through the lens of skin cancer. She now keeps a bottle of sunscreen by her front door as a reminder to lather up. She also wears hats, sunglasses, and scarves more than ever before. The appeal to her yearly Florida vacation has now wanned.

It does not stop there, the way her family talked to her changed. Her career took a wide left turn. Everything changed, big and small.

EDITOR’S NOTE: Recently, Buffalo Bills football team head coach, Sean McDermott, joined forces with the Skin Cancer Foundation because he too has been afflicted with skin cancer. As a long time fan of the Buffalo Bills, it was always strange to watch Coach McDermott wear these silly-looking hats and wear long sleeves during practices in the August heat. But, I also did not know his propensity for skin cancer, either. 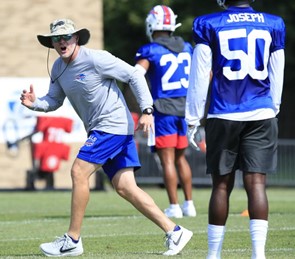 Epilogue
If there is anything to learn from this story it is this: Take control of your health.

“I now initiate everything” says Maria. “I follow-up. I call. I lobby for my own health with the healthcare bureaucracy.”

The Canadian healthcare system is a marvel of modern medicine and heralded across the World, but it is not perfect. Especially during a pandemic. If Maria learned anything during her ordeal is that even when it comes to healthcare, the squeaky wheel gets the grease.

Those are the realities we live in. Preventable diseases, like lung cancer, diabetes, and cardiovascular diseases had already pushed our healthcare system to the limits. Now, with one-and-half year’s worth of pandemic, the healthcare system is overflowing, and people are suffering needlessly.

Amidst all that, I am happy to report that things are looking promising for Maria. Her life may have changed dramatically, but she is happy and with her family. Let her story be a cautionary tale. Prevention is the best medicine, and if that is not possible, then grab the reins yourself and take control of your health.

Visit www.getskinhelp.com/getstartednow today and have your suspicious moles or bumps checked virtually.

Share this story and help us raise awareness about skin cancer.